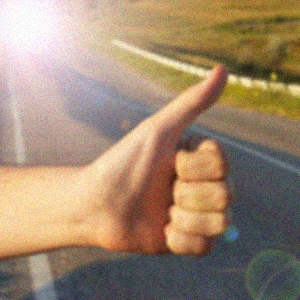 I’ve lived in the mountains outside of Santa Fe for a couple of decades now, and for nearly that entire time, I’ve been picking up Doc when I see him hitching a ride along the road to town.

Doc is not your typical homeless man, if there is such a thing. He is a vision, resplendent in long riding coat, boots, and a hat that blooms with turkey, eagle and peacock feathers. His gaunt face can barely be perceived between the collar of his great coat and the brim of his great hat. He appears at the side of the road like an apparition from the Old West as we like to think it might have been.

For the past fifty-two years, he tells me, he’s been living in a hidden encampment in some arroyo beyond the subdivisions and mansions that have sprawled out from the north side of Santa Fe, since regulations on height and hilltop building were defeated a few years ago by the threat of lawsuits against the city by rich would-be homeowners.

Doc, as he tells it, was the first inhabitant of my road, and with his stone-laying and landscaping skills, he helped to build the first houses; the very first one was a hunting lodge, long since gone.

I’ve lived in the mountains outside of Santa Fe for a couple of decades now, and for nearly that entire time, I’ve been picking up Doc when I see him hitching a ride along the road to town. Doc is not your typical homeless man, if there is such a thing.

I don’t know how he gets water to bathe in, but he is the most scrupulously clean and sweet smelling man I’ve ever met. Probably he dips water from the Little Tesuque Creek and warms it over the fire in a steel drum—also the place where he cooks whatever food he can procure by washing dishes in town.

We are having a horrifying warm and dry winter here, but there have been times when we were buried under snow and below-freezing temperatures, and Doc survived them all, along with a handful of other wanderers whom he tells me, with relief, have moved on.

But this winter, we have had ice as our meager coating of snow melts during the day and freezes again at night, and Doc tells me he slipped and fell on a patch at the side of the road and broke two ribs.

Because of Medicaid which he can draw on because he makes less than twelve thousand dollars a year—way less, I would guess—he was able to go to the hospital here and recuperate in their rehab center. There was nothing much they could do for his broken ribs, and now when he coughs, a racking cough that shakes the feathers on his hat, he is in pain.

This neighborhood was once inhabited by people in flight from conventional life, and a few of their rustic mountain cabins still exist, but the newer inhabitants are like suburban folk everywhere, fleeing from cities and then recreating a similar life here, with all the conveniences we have come to expect, enclosed in big or even enormous adobe houses set on the ridges along the road.

Our common preoccupation is that we are losing our groundwater. One after another, we drill new wells, from 350 feet deep to 500 and even 750, and eventually we will not be able to dig deep enough.

One of those original inhabitants, who lived for years in a tumbledown house at the turn of the road, died recently, and his house is in foreclosure; garbage is piled up around it, to the horror of the neighbors.

One of them suggested at our neighborhood meeting that we buy the house from the bank, at a modest cost, refurbish it and sell it again, perhaps at a profit. Then we can be sure, this neighbor suggested, that the right kind of family would move in. He spoke of a bank in town that had turned its foreclosed house into a drug rehabilitation center, and I lacked the nerve to tell him this might be its best use.

I’ve heard talk for years that the now-dead owner of the tumbledown house was a drug dealer. Having lived with addiction in my family for years, this news did not particularly horrify me. Addiction and addicts are all around us, whether we chose to recognize it at all. This disease crosses all class, economic and racial lines.

The last time I picked up Doc, I told him about the scheme to buy the tumbledown house, and he eagerly offered his fifty-two years of experience laying stone and landscaping gardens.

In an ideal world, the neighborhood would come together, interview this visitor from another world, and decide to hire him. In an ideal world, we might even realize that he is our historian, having known the place longer than any of us, and having witnessed its many changes.

In this world, there is almost no chance that a homeless man—or a “residentially challenged” man, as Doc humorously defines it—would ever be permitted to appear in one of our comfortable, tastefully decorated living rooms.

So I imagine talking to Doc, the next time I pick him up, of a more modest plan, to redesign my small drought-starved garden with the cactus and succulents that might possibly survive the water restrictions that will be mandated next summer—water restrictions from which two private golf courses are exempt.

And then I stumble on the same reaction I imagine my neighbors having: who is this strange man, costumed as if for the stage, who manages to survive, almost invisible, among us?

Is his time here, free and unimpeded, actually over? Should someone call the police and drive him out, as happened recently to the inhabitants of a homeless encampment down the hill?

Of course I won’t do that, and I will fight always to restrain the efforts of neighbors who now and then mention this idea.

But I probably won’t ask Doc to redesign my garden.