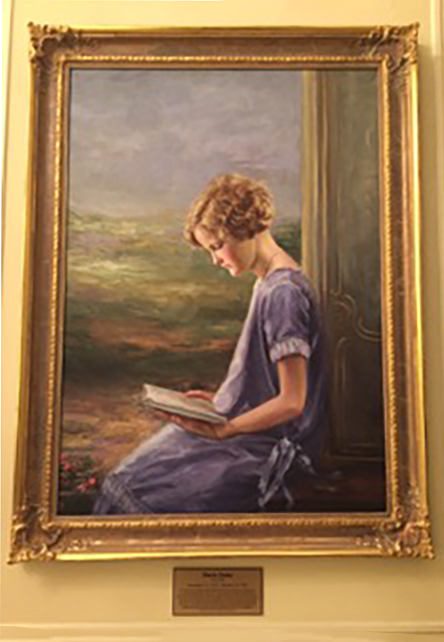 In my forthcoming biography, The Silver Swan: In Search of Doris Duke, due out from Farrar, Straus and Giroux in August, I deal with the inevitable connections and contradictions between these four issues—the issues that for most of the past generations defined women no matter what their real accomplishments or the power of their non-erotic histories.

I’ve woven the strands of sex, love, money and power together and their effect on Doris Duke as she developed from an unformed young woman of privilege into one of the great philanthropists of the past century.

Her early identity can be seen in the oil portrait that hangs in what was formerly her father’s house in North Carolina, now a B&B. Here it all is: the seated, apparently entirely passive girl, her eyes downcast; the book in her lap signaling that reading is a quiet, polite, acceptable pastime; the loveliness of the setting and the gold frame reminding the viewer, if reminding is needed, that this is a girl who is an emblem of the owning class. In fact—in the portrait—she herself seems owned.

So how to bring those untidy desires—sex, love, etc.—into this idealized landscape?

Does it matter that she never found her match in terms of money, status and achievement?

But how would she ever find her match?

In social terms, she never did. She was not only richer, as an adult, she was more powerful personally, than the men who happened to cross her path.

Yet she found plenty of love and plenty of sex without sacrificing either her money or her power.

Her first husband, the slightly older man-about-Manhattan (and Florida, and Europe) Jimmy Cromwell was more sophisticated and more assured than Doris was when she married him. In his strange courtship letters, Jimmy griped about her unavailability, threatened to twist her up like a pretzel, and often referred to himself as the O.M.—the Old Master, Helena Petrovna Blavatsky’s guru. If Doris wrote back, none of her letters were saved—and probably she didn’t write back which increased Jimmy’s sense of injury. But as their honeymoon progressed and he took up more and more light and air—appearing with her everywhere, with the kind of senatorial self-assurance that could make a young woman feel erased, she must have begun to wonder whether many decades of married life would leave her diminished. And then the possibility of an equal relationship diminished drastically; in Hawaii, Doris was coming into her own, creating her masterpiece, Shangri La, and Jimmy was becoming smaller and smaller as though she was seeing him through the wrong end of a telescope…

Years later, after many other love affairs with men who adored her and whom she adored, too—at least for a while—Doris married for the second and last time, the professional playboy, Porfirio Rubirosa. One thing is clear about this good-looking Santo Dominican sometimes diplomat: he was a lot of fun. A beautiful dancer, an accomplished polo player, with the polished manners of a dark-skinned outsider who found his place in Paris, Rubi for a while had enough personal power and charm to weigh in the scale with all of Doris’ other attributes.

But only for a while. He couldn’t be faithful, he couldn’t be part of the life an accomplished woman was developing. The handsome playboy became a burden and a bore and he and Doris parted on such friendly terms that he continued to write her loving letters for the rest of his life.

Jimmy, too, remained in her good graces, although with him it was more a question of his endless need for money to start various ill-fated projects. Doris provided the money and never scolded him about his failures.

So does it matter that she never found her match in terms of money, status and achievement?

I don’t think it matters at all. Many lovers, many friends, many adventures and the creation of her great houses were enough.

But you’ll have to read my biography to see if you agree.