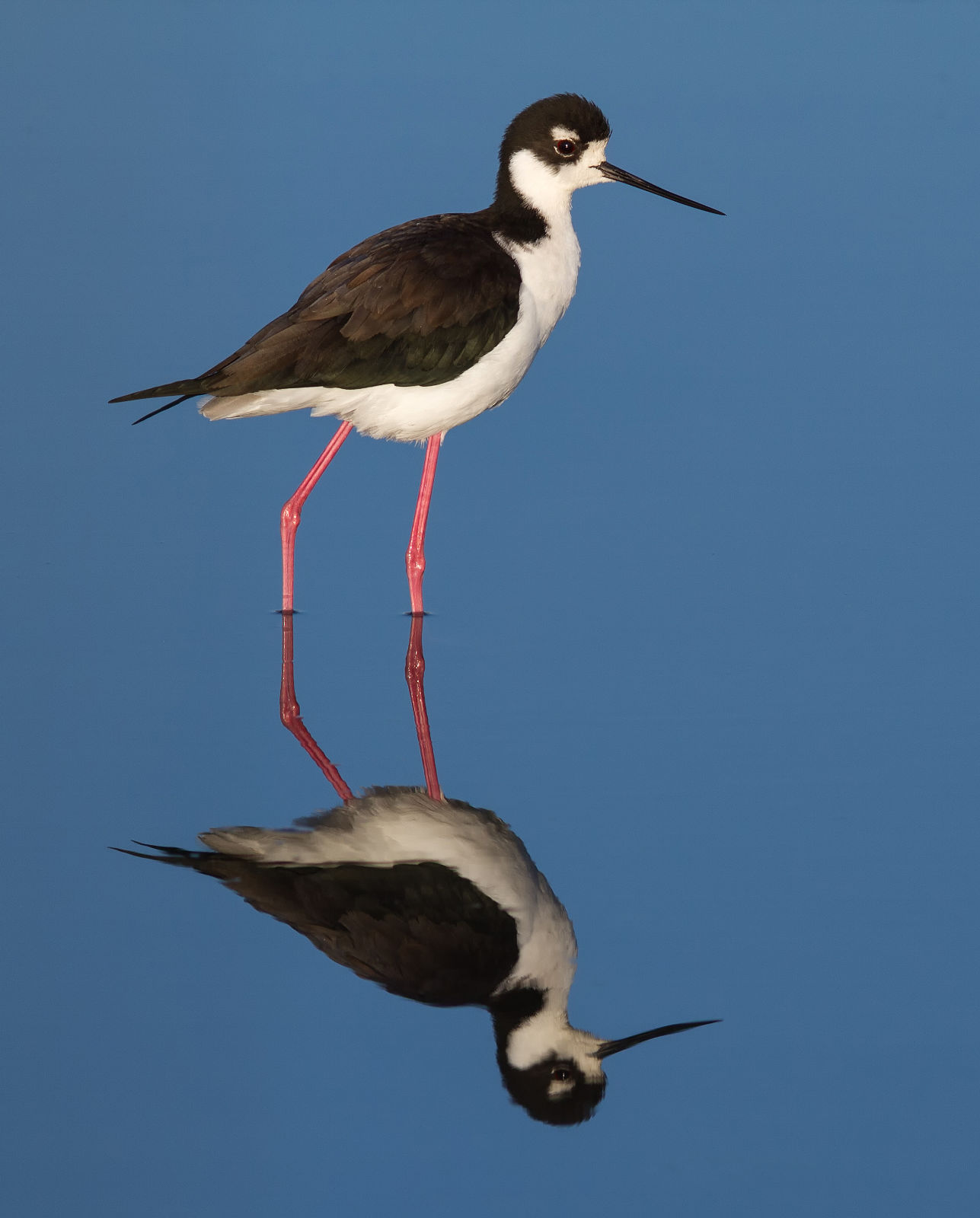 The Stilt is a long-legged shorebird with a long curving beak, the only bird other than Seagulls I’ve seen during a brief visit to Southern California. A little larger than a Sandpiper, the Stilt moves with a darting authority that seems bolder than the Sandpiper’s mincing steps.

This morning I saw a pair of Stilts, patrolling a cove beach. They were the only living creatures to be seen: the beach is closed, several signs warned, due to a sewage leak. The ocean water here can cause illness.

The Stilts have no thought of that. Pacing along the edge of the incoming tide, they know how to time the advance of the small waves, hurrying shoreward when the water reaches what we would call their ankles. During the few seconds when the water is withdrawn, they quickly dart their long curved beaks into the wet sand, searching for tiny mites. Then, they withdraw out of the reach of the water, quickly, but without any sense of urgency. After all, they perform this feeding ritual hundreds of times a day.

There is an avidity, even an arrogance, and a superb energy I sometimes detect in those who live alone...

There’s no gender identification I can see in the Stilts. For a while, they run and forage within a foot or two of each other. One of the pair is a bit bolder, staying a few seconds longer in the incoming water until it rises to what we would call its knees. Perhaps it is younger and so less cautious.

Then, to my surprise, one of the pair disappears. I think it is the smaller one. I search the small beach, but it has vanished. Meanwhile, its companion—or what I was thinking was its companion—has hit on a great area for hunting and is picking up minuscule insects by the beakful. I wonder if foraging along rather than with a partner is more fruitful.

I often think this is true for me in my largely solitary life.

Later, sitting alone in a coffee shop. I relish the chance to observe human beings in their Saturday morning routines. I am invisible. I can observe to my heart’s content, which I do, noticing with approval that the only other person who’s not part of a pair in the coffee shop is a woman who is not wearing shoes.

She’s not left her shoes off by chance or because she doesn’t have any; she’s wearing a decorative jacket, as well as earrings. She is barefooted because she has chosen to go shoeless, and because she is alone. She’d have been asked to put on her shoes if she was part of a couple any couple: mother, sister, boyfriend.

And this, to my mind, is another example of exquisite aloneness. She’s young, so of course she may be looking for a companion or wishing she had one. But something about her quiet confidence in that crowd of chattering coffee drinkers persuades me that she is happy, at least for the moment. What turmoil and confusion of Thanksgiving just passed is she escaping, exemplified for me in the grinding garbage trucks up the street, grabbing and masticating their piles of Thanksgiving refuse.

Of course we exquisite aloners have to deal with occasional bouts of loneliness that turn the whole world grey. We may be more avid for entertainment and distraction than our peers who are entertained and distracted by the people with whom they live. But there is an avidity, even an arrogance, and a superb energy I sometimes detect in those who live alone, and in myself—like the lone Stilt who is not looking around anxiously for the other Stilt but instead busily harvesting his allotment of insects—

Or maybe even more of her share, since she is alone.

Sallie's most recent work is titled The Blue Box: Three Lives In Letters, published by Sarabande Books in 2014. Her forthcoming book, The Silver Swan: Searching for Doris Duke, will be published by Farrar, Straus and Giroux in May 2020.