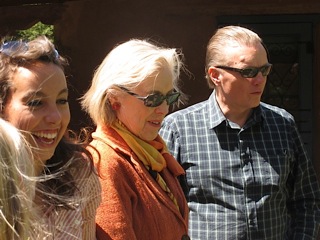 Does anyone visit cemeteries anymore?

Here in Santa Fe, the huge Rosario Cemetery, dedicated to the war dead, is ablaze with small American flags planted in front of each identical white headstone: here are buried the many New Mexicans who have died and continued to die in our wars, more than twice the national average. This is due to poverty, lack of viable choices after high school, and the insidious attempts of recruiting officers, stationed in the malls as well as the schools, to lure young people with their dissimulations about travel, beach vacations, high pay and so forth.

It has always been thus: poor young men, often minorities, and now poor young women, are devoured in wars that now are without end, the intermission between one conflict and the next devoted to developing, at a cost of billions of dollars, the nuclear arsenal that will, sooner or later, be used…

So we don’t visit cemeteries unless we are mourning those “untimely snatched from us” by wars whose meaning escapes us, whose cost horrifies us, and whose human cost is ever escalating as more generations of young people are devoured.

Instead, we share delightful family lunches and rejoice in our health, prosperity, our love for each other, and the beautiful weather that brings out iris and peonies but no American flags.