You are here: Home / Writing / Doris Duke and Me: Dancing
From the series: Doris Duke

You can find out more about my next book, now titled The Silver Swan: In Search of Doris Duke, on my dedicated Doris Duke bibliography page. 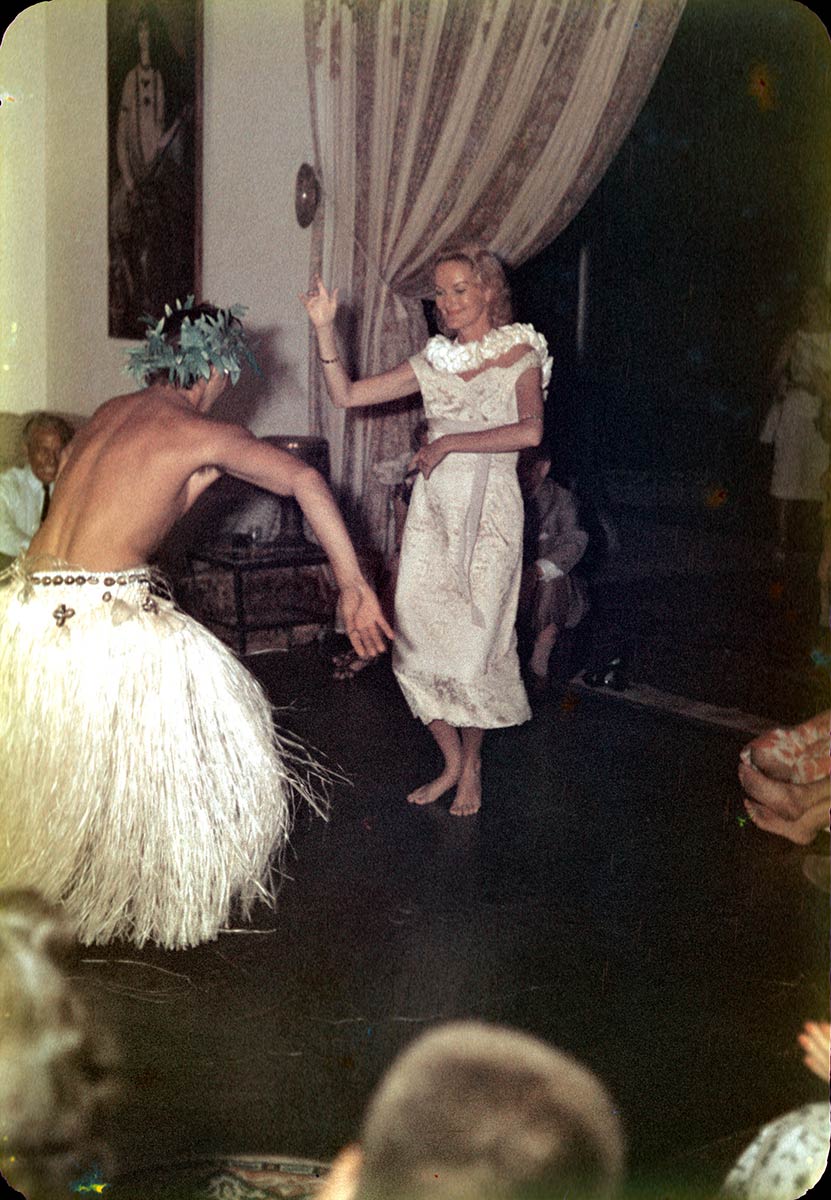 I’ve been a writer since I was a large child, and yet nearly everyone thinks I’m a dancer—which I am. This intrigues me, especially since dancing is one of my links with Doris Duke, the subject of my biography.

It’s fair to say she was and I am gifted amateurs, though I think Doris might bristle at the label. She practiced with Martha Graham’s company in New York and proudly wore their black satin jacket with her name and the company’s name on the back; but she was not young, and she lacked the professional training that might have made Graham consider her for a role in her company.

I don’t know what Doris thought of that possibly missed opportunity; she admired and respected Graham and may never have asked to be considered. Limber and long-limbed, she was photographed stretching at the bar in Graham’s New York studio, a bootleg photo later published in Confidential, the Los Angeles gossip magazine.

But her wish to dance with the lesser know African-American dancer and choreographer, Katherine Dunham, led to the end of their friendship as well as the end of Doris’ financial support, two serious blows for a woman who had come to depend on Doris’ friendship as well as her generosity. Perhaps Doris felt, mistakenly, that the African-American dancer of great talent and discipline, who performed world-wide, would be more amenable to an white woman’s request. If so, she added a subtle insult to her demand to be included in the company.

Doris Duke practiced with Martha Graham’s company in New York and proudly wore their black satin jacket with her name and the company’s name on the back.

I never aspired to dance with a company; I love ballroom dance, that sometimes tawdry, always fascinating exploration of ancient stereotypes: the ageless women in form-fitting, backless, sleeveless, low-cut performance costumes, twirling in the waltz, the foxtrot and the quickstep to forties hits from Broadway shows. Ballroom dancing evokes a sentimental belief in romance that I’ve outgrown—at least on a rational level.

When I take my weekly dance lesson with my dear friend and teacher, Lawrence Black, I am not too delighted with my reflection in the mirrors that line his studio—better if I take off my glasses. But the music always lifts my spirits, the flow movements are delightful, and I take special pleasure in watching the other dancers, many of them venturing on the floor for the first time. We are so seldom granted the privilege of seeing grown-ups learning, and the awkwardness and enthusiasm of many of these students, especially the men, warm my heart.

As I think dancing, especially in Hawaii, warmed Doris’. Barefoot, as she loved to be, in one of the dramatic rooms at her house there, Shangri La, she is smiling down at the Hawaiian man who seems nearly to crouch in front of her. A uniformed maid watches in the background, and the audience of friends provides an admiring ring.

How good it is to know that there were these moments of pleasure far from the cruel scrutiny to which Doris Duke was too often exposed.

For more on my ballroom dancing, read my post “Dancing Again“

French for “Afterthought” or “Why in the name of God didn’t I think of that while I was still there?” "L'esprit de L'escalier": https://s-b.io/3gM2gXi #SantaFe #SantaFeNM #NoTrespassing #Coronavirus #dogwalking

If we treat ourselves as the #queens we are, the example of #Liliuokalani may inspire us. "A Queen Exiled At Home": https://s-b.io/2KSwDgP #DorisDuke #ShangriLaHawaii #StayHome #StayAtHome #women #feminism