You are here: Home / Women / Some Remarkable Women 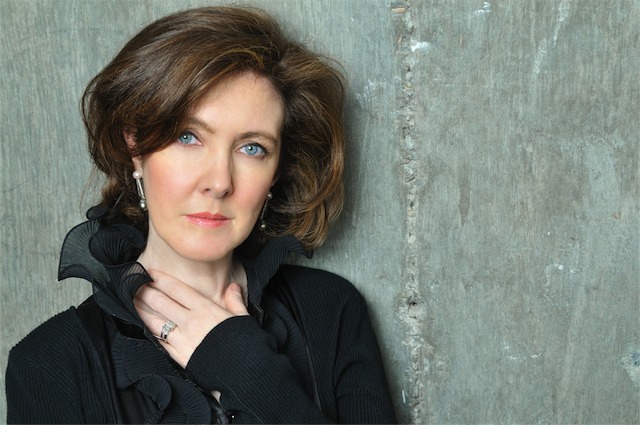 To my mind, all women are remarkable in many ways, but as we know, only a few of us are recognized. So now I give you several who have been seen as remarkable; they stand for a multitude of others who through timing, luck or geography are never given the accolades they deserve.

First of all, pianist and conductor Anne-Marie McDermott, who is performing here in Santa Fe as part of Pro Musica’s Distinguished Women in Classical Music, a program honoring and introducing women conductors; there are many women conductors graduating from top music schools, but classical orchestras are seldom hiring them. Anne-Marie plays Mozart and Haydn with a brio that is truly astonishing; as soon as she sits down at the piano, her large, strong, articulated fingers attack the keyboard, and with modulations that transfix me, she launches into her music. To see a woman command not only the piano but the chamber music orchestra she conducts with subtle expressions and gestures—from the keyboard!—is to coin a new version of mastery, which should really be called misstressy. 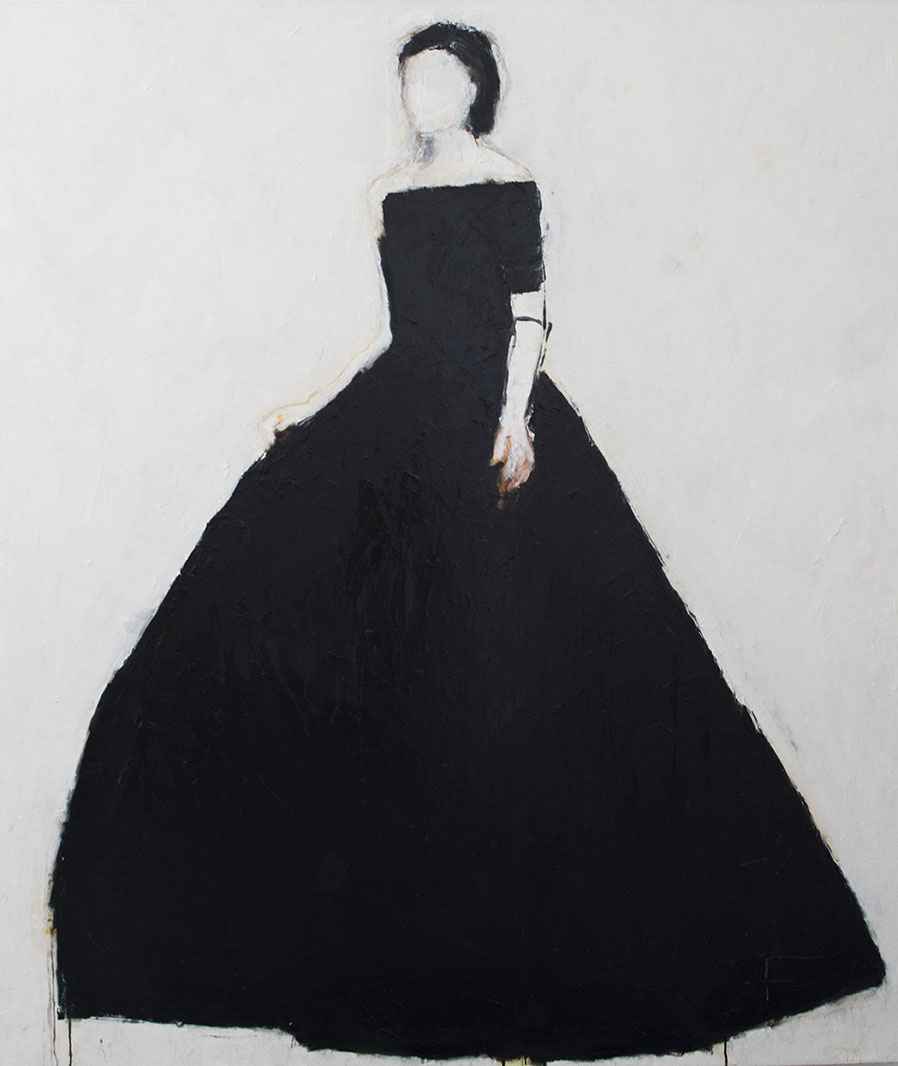 LewAllen Galleries here in Santa Fe is showing the large paintings of Linda Stojak in an exhibit called Looking Away. Mysterious, haunting female figures painted in oil on large canvases against stark backgrounds, turn away, or half away, white faces without features except for bloody-looking mouths. Their dresses are huge, dominating the canvas. One in particular, a mass of black, seems to convey an impact as powerful as the ghostly face. Although the gallery doesn’t refer to Stojak’s paintings in this way—most collectors of paintings as high-priced as these are inevitably men—these female figures convey a disturbing sense not only of inherent strength but of the blotting out of that strength. They have no features other than those wounded-looking mouths, and their monumental dresses express as much as their white faces. 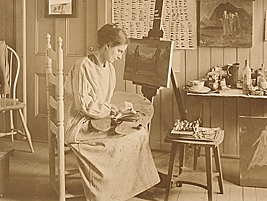 And then there’s the work of Agnes Pelton, described as a Desert Transcendentalist, which may be the correct term. Her big abstracts seem to glow with a yellow fire from beneath her pigments, but because she lived and worked in Cathedral City, California, far from the coast galleries and critics, her art was forgotten after her death. She came from an earlier generation of well-trained women artists—see the photo of her, looking as modest as a sparrow—who did not pursue public recognition. Her paintings are now beginning to be recognized with a traveling show that originated in Phoenix. The handsome hard-cover catalogue for this show, which will travel, seems to ensure that her work will not lapse back into obscurity.
I give you several women who have been seen as remarkable; they stand for a multitude of others who through timing, luck or geography are never given the accolades they deserve. 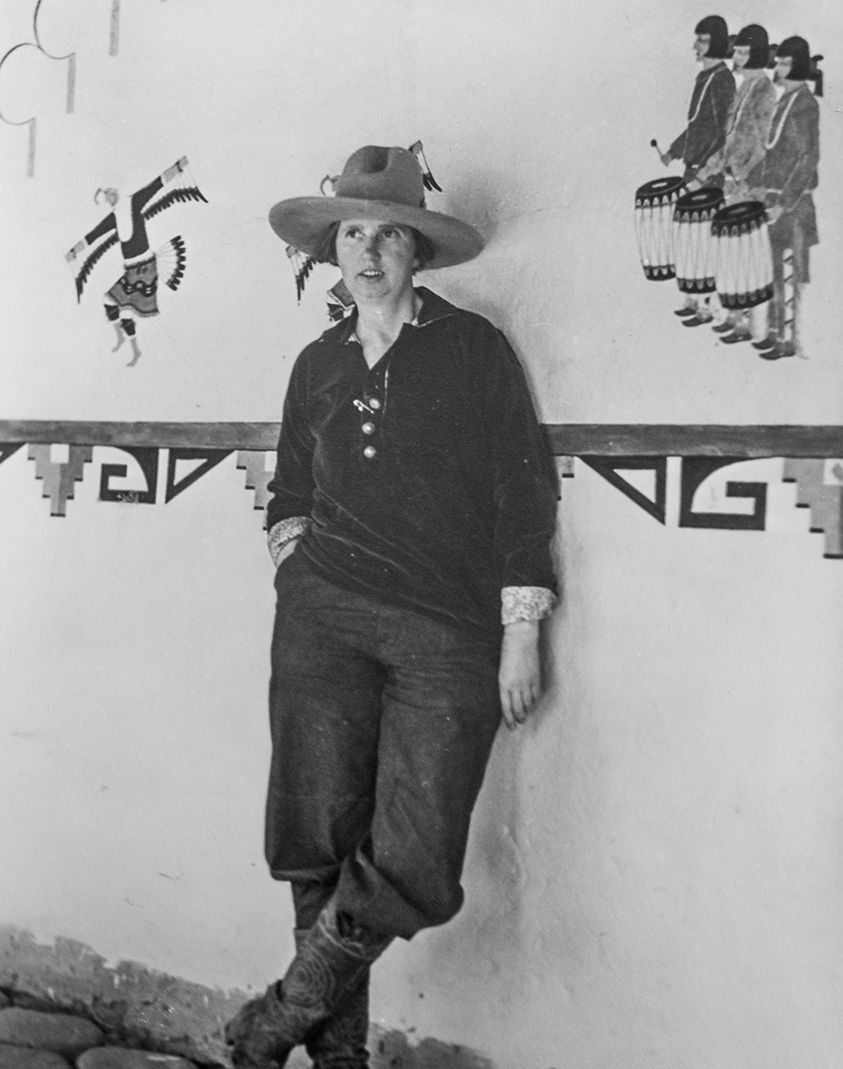 Remains of the day: Dorothy Brett, circa 1924, Museum of New Mexico Press

Still waiting to be recognized is the Taos painter, Dorothy Brett, an Englishwoman who followed D.H. Lawrence to Taos, New Mexico, in the 1920’s—the only one of the group he had tried to assemble in England. The prospect of a remote Northern New Mexico town apparently was not attractive enough to lure the others across the Atlantic, but Dorothy Brett came and spent the rest of her life deeply invested in Pueblo culture and painting many local scenes, including a group of Natives riding up their mountain to their sacred Blue Lake, not often shown to white people. It is embarrassing to note that Wikipedia states that Brett is known as much for her “social life as for her art”—which is hardly the case. I’d like to ask whoever actually writes the Wikipedia entries what social life she/he imagines in a remote village in the Sangre de Cristo Mountains. 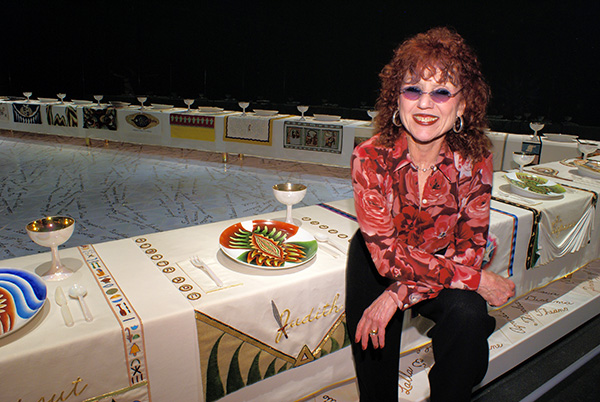 One painter stands out both an outspoken feminist and an accomplished painter and sculptor: Judy Chicago. After decades of struggle, she is recognized all over the world for her large body of work. Her biggest piece, a collaboration created with a team of women ceramicists, is The Dinner Party, now housed in a wing devoted to feminist art in the Brooklyn Fine Arts Museum.

We keep on working, no matter what, and the example of those of us who have gained recognition is inspiring.